Heya nerds! Welcome to a special edition of “The Salt and I”. For your weekly viewing pleasure, as I was unable to attend my normally scheduled FNM at Jack’s on Queen, I will be looking at some of the interesting cards WotC has come up with in the new set Oath of the Gatewatch. Without further ado, let’s get started!

I’m warning you now, the following cards have officially been spoiled by Wizard’s of the Coast. If you wish to keep your Oath virgin eyes as such, now is the time to click away! 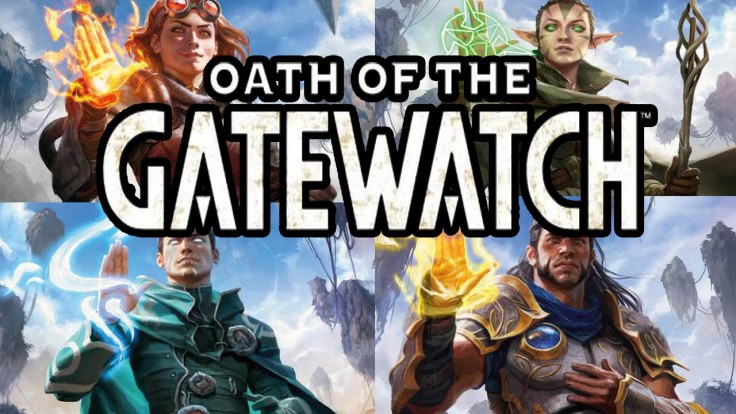 Alright, now that that’s out of the way let’s get into the good stuff.

I’m going to start off with the ‘pillars’ of the set, the Oaths. Being the four planeswalkers that rallied together, Gideon, Jace, Chandra, and Nissa have their own respective oaths that they undertook. I particularly like Nissa’s oath and I find that it gives the most value, especially considering it’s one one CMC. The ability to dig through three of your top cards and grab one, with the added ability to tap mana of any colour to cast walkers is insane. While Gideon’s oath offers planeswalker ultimates sooner, Jace’s oath grants a constant scry on your upkeep. I feel that Chandra’s oath is probably the weakest as it requires you to play a planeswalker in order to trigger the bolt effect. So I shall rate them; Nissa, Gideon, Jace, and lastly Chandra.

This set of 184 cards brings us two new planeswalkers. Well, we’ve met them already but they are different. The first of these is Nissa, Voice of Zendikar. I’m going to start off by saying how amazing I believe she is. Once she hits, not only can she protect herself with her +1 by puting a 0/2 plant onto the battlefield, but if you have enough protection you can -2 her and pump all of your creatures. Once she hits seven loyalty, you can gain X life and draw X cards where X is the number of lands you control. She gets an A+ from me and all green players should consider her for their decks, here’s looking at you Hardened Scales!

The second of the two walkers is Chandra, Flamecaller. For six mana, she is pretty darn good. Her four loyalty at entrance is ok, but it’s her abilities that make her insane. For +1 she puts two 3/1 elementals with haste onto the battlefiend and exile them at the end of your turn. Her 0 makes you discard your hand and draw that many cards, if you have a mitt full of dead cards, this is a great play. Finally her -X deals X damage to all creatures on board, so she can deal four damage on entry, so she pseudo protects herself, expect to see lots of her kicking around.

Now the big baddy of the set, Kozilek, the Great Distortion. This guy is a monstrous 12/12 for 8(C)(C). Once you cast this massive eldrazi, you get to draw cards up to seven which is decent. Not only does it have menace, but all of a sudden your mitt full of cards becomes an array of counter spells. He pseudo protects himself with the cards that you draw off of his ETB effect. So I’d consider him pretty solid.

In terms of other eldrazi running around there are a plethora of devoid spells. We see our first white eldrazi in the form of Eldrazi Displacer. I’m calling it now, this deck is going to be played in Abzan, blinking a Siege Rhino is a great way to swing six life for three mana. Matter Reshaper replaces itself, great value. There’s one such card that will not make my brother’s mill deck happy, Inverter of Truth. This four drop for a 6/6 flier makes their graveyard become their library, but before that it exiles your library so playing this early is not a good idea. There are many other eldrazi that appear quite enticing, we shall see what makes the standard cut!

Oh man, lots of controversy regarding the new Wastes. These are new basic lands that produce colourless mana which is required to cast some of the new eldrazi. As they are a basic land they can be fetched with cards such as Evolving Wilds. WotC also gave us new allied tap lands. We also got the final three enemy colour man lands that we have been waiting for. Wandering Fumarole is your red/ blue man land that turns into either a 1/4 for blocking or a 4/1 for attacking, great for control decks. Needle Spires is interesting as the red/white land gains double strike when it becomes a creature. However, my favourite of the three man lands has to be Hissing Quagmire, this black/green man land gains death touch, which is amazing for various combat tricks. It may not be the best of the man lands, but I love the flavour.

Colour wheel wise, white still seems to be the go to Ally train. Blue has a nice split of eldrazi and typical blue control spells. Black is primarily eldrazi with a spattering of vampires. Red gets some eldrazi with an influx of various creature burn spells. Last but not least green has it’s own strong eldrazi, mixed with landfall, and the new mechanic support.

In conclusion, I am super excited to see the sealed capabilities of this set. The massive amounts of eldrazi combined with all the new allies, adding all the new surge and support mechanics will add depth and replay-ability to the current meta.

Anyways, I hope you’re all hyped for prerelease! Stay salty my friends…