Hello once again my fellow spell slingers. It is I, the Salt Shaker Supreme, and I have returned from my writing hiatus with something a little different. I have not been to FNM in quite some time and since Pro Tour Amonkhet is in our rear views I thought it was be fun to take a look at some of the decks that managed to slag their way into the Top 8. In the latter half of this article I would like to compare two versions of the increasingly popular pseudo-combo deck featuring the legendary artifact from Kaladesh; Aetherworks Marvel.

Even though I’ve been off of standard for a while, I still thoroughly enjoy watching it. I especially enjoy spectating standard when the cards are in the hands of some of the best Magic players on the planet. On the weekend of May 13th, 2017, the worlds’ best MTG spell slingers traveled from around the globe to Nashville, Tennessee, to battle it out for the prestigious Pro Tour trophy!

The Pro Tour was a magnificent spectacle to behold. Watching all of the cool new innovative ways to utilize the fresh cards coming out of Amonkhet was quite the sight. After a brutal slugfest of draft and standard swiss, there arose eight players to duke it out in single elimination until only one remained. The Top 8 lists can be found here, but I’ll give y’all a quick run down of the standings.

I’ve seen a few people trolling around on Reddit and Facebook asking the REAL BURNING question of “Where was Mardu Vehicles?” and I believe I have the answer. You see, in a world where Saheeli Rai and Felidar Guardian are a turn 4 auto win, you need someone able to rise up and beat it, because there is a reason Splinter Twin got banned in Modern, no one likes a turn 4 kill.

In my honest opinion I believe Mardu Vehicles was a necessary evil to combat Copy Cat Combo. It was full of cheap burn, spot removal to deal with Felidar Guardian, and evasive cheap creatures to kill Saheeli when she hits the field. In a post-Felidar banned format, I believe we will see less and less of Mardu Vehicles, as the threat of monstrous eldrazi titans and hordes of recurring zombies slowly takes over the format. 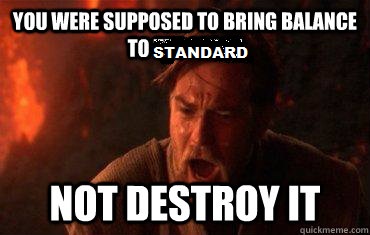 Temur or Sultai? Red or Black?

For those of you whom have been following my blog for a while, are aware that I have been out of the standard game for a wee bit. There hasn’t been anything that really makes me go “oooh shiney!” for quite some time. However, watching the Pro Tour I stumbled onto a list by one Reid Duke that didn’t have a particularly strong showing, of 6-4, but I thought the deck was sweet. The deck is an interesting take on the typical Aetherworks Marvel lists by removing the red and adding black. The temur list feels more like an actual energy list where as the sultai list feels more like a delirium-esque list.

There are quite a few pros in terms of running the temur build. The biggest and probably most apparent bonus is Harnessed Lightning. This versatile instant speed removal spell is not merely just an expensive bolt. One of the most innovative ways I’ve seen this played is to target ones’ own creature, generate the three energy, then spend none, dealing zero damage to the target. Another perk of running temur is Whirler Virtuoso. This three mana dude has a pretty cool ability to vomit 1/1 flying thopter tokens for three energy. Whirler Virtuoso enables one to go wide with tokens when the board is gummed up with creatures. The third and final big perk to playing red is Chandra, Flamecaller. Not only can she refill your hand with her zero ability, but she can just Ball Lightning. If that isn’t your speed she can deal three damage board wide while retaining one loyalty counter.

Onto Mr. Duke’s list which he played at the Pro Tour. I’ve been playing this version online quite a bit and it feels very similar to the Green-Black Delirium list that I used to run back in the day. Now what are the pros of playing black? WELL LET ME TELL YOU I’M LOVING IT! To start things off, the most format shaping card in a while, Fatal Push. This one drop kill spell has completely shaken up the modern format and I feel it is still super strong in standard as well. Whirler Virtuoso grants the temur list a cheap way to drain energy, black gives us Demon of Dark Schemes. Not only does he act as a pseudo-sweeper, but him sweeping some wheenies can grant crazy amounts of energy. Not only that, but he has the insanely good ability to pick creatures out of not only my graveyard, but my opponent’s graveyard as well. Temur Aetherworks gets Chandra, and Sultai Aetherworks gets an equally awesome femme fatale in the shape of Liliana, Death’s Majesty. Her plus one ability feeds delirium, and she works well with DoDS in filling my yard, giving me an ample supply to pluck from. Her negative three ability is the real kicker though, being able to grab back an Ulamog, or a Demon is sweet business. Finally her negative seven wipes the board, sparing zombies. This is relevant as her second ability makes the creatures she reanimates into zombies so she doesn’t wipe her own board. There are also other huge boons to playing black. Black gives us access to the mirror killer Dispossess, the reanimation killer Kalitas, and the new walker removal spell Never//Return.

I guess it all comes down to a matter of one’s own play style. As I played delirium before and was a fan of it I believe that is why I am drawn to the sultai version as opposed to the temur version.

That looks like all about I wanted to talk about today…WOAH! SPOILER ALERT!

HOLY CHRISTMAS LAND BATMAN! Looks like we have officially received our first spoilers for the upcoming set Hour of Devastation! 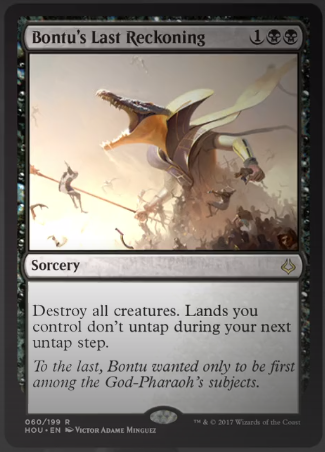 First off we have a gorgeous new board wipe in black. I just wanted to begin by saying this art is beautiful. Oh it looks amazing. Now onto the actual card. A three mana board wipe is yuge, and yes, I am talking Trump yuge. However, the downside to this card could be quite crippling. I have high hopes for this card and how we will eventually see the pros find a way to break it. 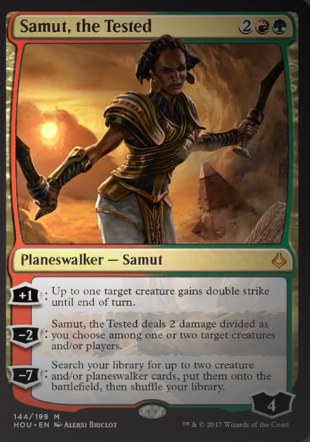 Samut was a red and green legendary creature from Amonkhet with a white activated ability. Seeing her returning as a strictly two colour planeswalker is interesting. At four converted mana cost and four loyalty she has a one plus ability and two minus abilities. My first instinct right off the bat is she isn’t going to be particularly strong. Her immediate presence on the battlefield is heavily dependent on you having a creature to utilize her double strike. Playing her on an an empty board is basically useless, unless you count shocking your opponent for four mana and two loyalty is productive. Her ultimate is kinda cute as you can just slam things from your library, but I feel that is the only thing this “tested” Tessa has at her disposal. 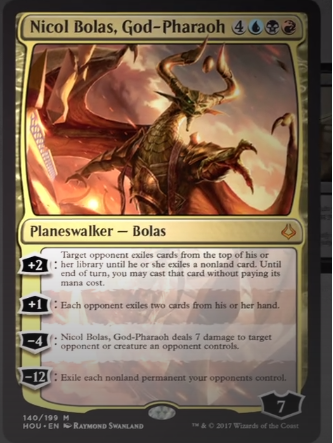 ALL HAIL THE GOD-PHARAOH! Oh baby! Bolas is back and he is maaaaaaaad! This seven cmc, seven loyalty, four ability gangster dragon looks mad enough to break the Donald. His first ability is possibly the most broken walker ability I have ever seen. It exiles cards from your opponents’ library until they hit a nonland, then casts it for free…are you kitten me. How is that not a negative ability? That is insane. His alternate up ability has your opponent exiling two cards from their hand…that is also insanely good. He has a negative four ability which is straight up deal seven damage to either a creature your opponent controls, or their face, whichever you prefer. Finally, the piece de resistance, exile each nonland permanent your opponents control. This is gonna be hectic as anything in multiplayer, and in one on one? Gummed up board? Sure, exile everything they have. Pesky Ulamog in your way? Ok byeeeee.

So far, two of the three cards spoiled have gotten me really excited! I can not wait to see what WOTC does with the next set. HYPE HYPE HYPE.

Until next time! Stay sodium’d my friends.