Helllooooooo again fellow nerds! It’s that special time of the week again, FNM review time! This week I attended my beloved LGS Jack’s on Queen, and can I say that it feels good to be in my home slinging spells again. The past couple fridays I have either been out of province or working, so being able to attend FNM was pretty awesome. This week I decided to jump back into the roil that is standard and slam some turn four Ulamogs with the help of the legendary artifact, Aetherworks Marvel.

So this is the deck I decided to run for FNM; Sultai Marvel. If you are familiar with other sultai marvel lists then you are aware that that are some cards in the list that are not normal. Firstly, Kozilek, the Great Distortion in the main board is a huge curve ball. Not only is he a twelve power/toughness beater, he also has menace, and his cast trigger allows me to draw to seven cards, which is amazing. In addition to the boss cast trigger, he has another ability that allows me to discard a card with converted mana cost X and counter a spell with converted mana cost X. It throws people way off of their game. Now the rest of the main board is quite similar to what you’d see in a stock marvel list. But it’s what is in the sideboard that I hold my SUPER SECRET SIDEBOARD TECH. Well, I guess it’s not going to be secret anymore…but that still doesn’t take away from the fact that this card can come in super clutch. Descend Upon the Sinful is a six drop white sorcery from Shadows over Innistrad that exiles all creatures, and if I have delirium I get a four power/toughnes angel with flying! I can technically cast it with Aether Hub and Servant of the Conduit, it feels the best when played during my opponent’s combat step via marvel.

Now onto the games!

I’ve always thought Approach of the Second Sun was a brilliantly well crafted card. I originally wanted to run it in an Aetherworks Marvel shell, but after playing against my opponent here I can see it fits very well in a blue and white control shell. Game one my opponent dropped a Gideon of the Trials on curve and immediately pumped out an emblem, now the dude could not lose the game as long as he controlled a Gideon walker. I stuck a copy of Woodweaver’s Puzzleknot, and managed to keep myself at a healthy life total while his Gideon went to beat town on my face. I survived long enough to marvel into Ulamog and exile Gideon and one of his lands. Two combat steps later my opponent was dead. Game two I decided on the face beat plan as I didn’t see marvel once. I small army of Servant of the Conduit and Rogue Refiner led the charge into my opponent’s face. About turn seven my opponent cast his first Approach of the Second Sun, and that’s when things got hairy. A turn prior to casting Approach he cast Fumigate, destroy my Servant and Refiner. He placed Approach seventh from the top and passed turn to me. I drew into another Rogue Refiner and his draw net me a second Servant, it was back to beat town for me! My opponent drew for his turn and passed to me. I drew for turn and glory be, it was my sideboard card, Censor! At the end of my turn my opponent cast Pull from Tomorrow drawing himself five cards. Doing mental math is not my strong suit, but I knew for a fact that Approach was now the top card of his library. At this point my opponent was giddy, like, school girl giddy that they were finally going to pull off a win with Approach. My opponent untapped their lands, drew their card and slammed Approach of the Second Sun. I responded with Censor; “Counter unless you pay one?” It was at this point that my opponent revealed a land from their hand and asked me if he could play it before this whole thing started. This is where having a judge at the store would come in handy…oh wait…THAT’S ME! I explained to my opponent that at a casual event like FNM rewinds would sometimes be considered, at the discretion of a judge, if no extra knowledge had already been gained at the time of the rewind. For example, if my opponent had said; “Cast approa…wait…JUDGE!” at this point I would have permitted a back up because nothing was actually cast and no extra knowledge had been gained. But in our situation it would have had a huge impact on the current state of the game, and two spells had already been cast. My opponent fully understood what I was trying to explain and graciously extended a hand in concession, as I had lethal on board. So my round two opponent was a wee bloke. No sleeves, no playmat, but a guy after my own heart. His deck was ramp super hard and spit out the biggest, beefiest green and white creatures since zendikar and I was loving it. Game one ended very abruptly when I stuck a marvel on turn four and spun into an Ulamog, and it was at this point my opponent got a look in his eye, a look I remember getting the first time I saw something really awesome, wonder. He lit up like a christmas tree, “Dude that card is wicked awesome!” he shouted as he instinctively reached across the table and peeled the eldrazi titan out of my hand. “I want four of these!” he laughed as he handed it back to me. Then I realized something, this kid just got mega cheesed. I dropped an eldrazi titan on turn four and ended the game, and the kid was happy? I think that is what a lot of people forget about this game. IT’S A GAME! He didn’t care whether he won or lost, he was having a blast playing magic, and I think that is the kind of mindset I need to get myself back into. While were shuffling our decks for game two he leaned across the table and asked, “When do you think the Pro Tour is coming to Toronto?”. I gave him a sort of stunned look and gave him the most honest answer I could, “I have no idea.” “Ok, well once it does, I’m going to be there, and I’m going to win.” I swear this kid was straight out of an anime. The sheer tenacity of this young player was astounding, and it sure showed up in our second game. Buddy managed to assemble a small fighting force of three Aerial Responders and proceeded to go ape on my face. After some back and forth attacks he was at twenty-nine life and I was sitting at ten, but the tables were about to turn. I drew into Yahenni’s Expertise wiping his board, and mine, while dropping a lone Rogue Refiner to hold down the fort. My opponent still had one long three power, four toughness flier that managed to swing over my Refiner and take me to seven. Once again the top deck gods were in my corner and Demon of Dark Schemes came flying off of the top rope. Now, with a five power/toughness flier out I was able to stabilize, utilizing his ability to grab some Aerial Responders from my opponent’s graveyard and bring them to fight for my cause. Well played little dude, well played.

I knew this day would come. I knew sooner or later I would be staring down a horde of undead with nothing but a machine and an eldrazi titan by my side. Game one was textbook. Turn one Attune, turn two Servant, turn three Refiner, turn four Marvel into Ulamog. I could not have written it better. Game two was entirely my game to lose. I decided to keep a one land hand because I had two copies of attune, a puzzleknot, a marvel, and some other cards. I was able to tutor for two more lands thanks to the Attunes, but I never drew land number four for marvel. My opponent got double Lord of the Accursed and even Yahenni’s Expertise would not have pulled me back. Game three was so close. Long story short I lost, once again at the mercy of my deck drawing two copies of Ulamog and the one Kozilek in the deck. I needed a fourth untapped land to Marvel into something, but alas I only had a tapped land. My draw on the turn I passed into death was a Demon of Dark Schemes, but my opponent had two lord abilities out so that wasn’t going to do much. After I passed my opponent drowned me in zombies. I decided to look at the top card of my library just to punish myself, and low and behold it was a forest. My opponent asked, “If the demon wasn’t on top, and you had that land, spin the marvel and see what would have been.” So I put the land next to my lands, put the marvel from my hand into play, and peeled the top six cards of my library into sight of both of us, guess what I found. LAND, LAND, LAND, LAND, LAND, and the sixth and final card, Descend Upon the Sinful. I face palmed so hard. Had I survived for one more turn, everything was going to be gone and I would have maybe had a chance at winning the game. But all in all, it’s always great games against this opponent. YOU KNOW WHO YOU ARE!

We went 2-1. Both of our wins were in two and our loss was in three so it wasn’t too bad. I managed to place third which put me in prize contention but locked me out of Aether Hub promo territory, as it only goes to the top two. BUT ONCE AGAIN LADY LUCK WAS SMILING DOWN UPON ME! GUESS WHO THE COMPUTER RANDOMLY GENERATED FOR THE RANDOM PROMO WIN. This guy. 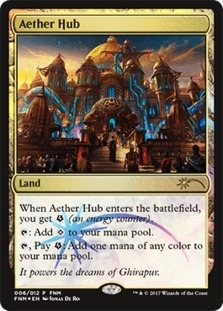 I will hopefully attend FNM in two weeks as I am locked to work this coming week. I am trying to pump out more content, and I am making a promise now to put out at least one article a week. Whether it be a budget deck tech, a planeswalker profile, a spoiler review or just a typical FNM report, there will be something for you to read.