What is going on fellow spell slingers? It’s me, attending back to back FNM’s at Jack’s on Queen. We are playing standard again this week, running an altered variation of our Marvel-less Sultai list. Since we didn’t have time to change last weeks sideboard, I made some changes this week prior to playing.

I removed the one mainboard Dissenter’s Deliverance and replaced it with a Censor. I picked up more counter spells for the sideboard in the form of Disallow, some enchantment removal in Appetite for the Unnatural, and some nice Traverse target in Noxious Gearhulk.

Let’s run it back! Round one was your copy and paste green/black energy list, atleast from what I saw. My opponent had some terrible luck in the sense that they drew ten of their nineteen lands in both of our games. Even with my opponent drawing extra cards with Glint-Sleeve Siphoner, there wasn’t much to be done in either game as his lack of non-lands lead to my unopposed victory.

I really loved my opponent’s list. Utilizing cheap CMC cats from Amonkhet coupled with Regal Caracal, Vizier of Many Faces, and Aven Wind Guide, my opponent could have easily overwhelmed it, if they drew the lands they so desperately needed. Game one saw my opponent have two lands for the first five turns of the game. In my opponent’s defense he was already on a mulligan to five and going to four is hardly a good idea. It only got worse in game two when they have one land until they managed to hit their second on turn six. I really enjoyed what my opponent was trying to do, as I am fascinated with super unorthodox combos, but I guess it just wasn’t in the cards….PUN JAR!

My arch nemesis from last week playing the good old black/white nonsense. Game one I decided to take a risk and keep a super land heavy hand, as I believed I had two copies of Servant of the Conduit and a couple of five CMC cards would I would be able to hit even on turn four if I hit a single land. But after my opponent slapped me with a Fumigate as they took note of my lack of resources, a Gideon, Ally of Zendikar quickly closed the game. Game two was going quite well. I had a decent board state, my opponent was at seven life, I had three copies of Rogue Refiner on board, things were looking up. Boy did I get punked. My opponent cast Declaration in Stone, exiling all of my Refiners and eventually crawling his way back up to seventeen life with the help of a single Shambling Vent. But thanks to the clues from Declaration, I was able to sacrifice a clue, enabling the revolt on my Fatal Push thus killing a copy of Kalitas, Traitor of Ghet, giving me the upper hand and stabilizing. Game three was nuts. People prefer running Temur energy as opposed to Sultai mainly because Harnessed Lightning is so good, but I think Die Young is a close contender and helped me pick off my opponent’s Gisela, the Broken Blade, nice and early. My opponent was smart and always left a single land untapped whenever casting a spell as to avoid getting Censored. Things got kind of intense when my opponent cast Bruna, the Fading Light, and brought back his Gisela. At his end step, they melded into Brisela and now I was facing down a nine power, ten toughness creature with flying, vigilance, lifelink and first strike, what is one supposed to do? Two words; Noxious Gearhulk. He was sitting in my hand since the game started and was about to make his presence known to the world. Popping Brisela on his ETB effect, bringing me from twelve life to twenty two. At this point in the game I was pretty firmly in the driver seat. On my next turn I used Liliana, Death’s Majesty, to reanimate my own Demon of Dark Schemes in my yard and passed to my opponent. He did some stuff and in his end step I used my DoDS to pick Gisela and Bruna out of my opponent’s graveyard and put them onto my side of the battlefield. I untapped, upkeeped, drew, proceeded straight to combat, and with the combined might of Noxious Gearhulk, DoDS, Bruna, Gisela, and Ishkanah, my opponent took nineteen points of damage and extended the hand.

We managed to eek out first for the second week in a row. My first two rounds were brutal. I know some people say “a win is a win” but a victory against an opponent whose own deck is being more of a nuisance than me just feels bad. Round three was intense though, both of us vying for the top spot, in a match of big monsters and clutch removal spells, great game. So with the changes to the sideboard I feel like I have more control of the game with the extra Censor and the Disallows. I will eventually drop the final Channeler Initiate and replace it with a fourth and final Traverse the Ulvenwald. I also think Glint-Sleeve Siphoner as a two-of might be what the deck needs as an additional energy sink. But who knows, with the Hour of Devastation approaching, what diabolical concoctions will people begin bringing to the tables.

SPEAKING OF HOUR OF DEVASTATION!!! 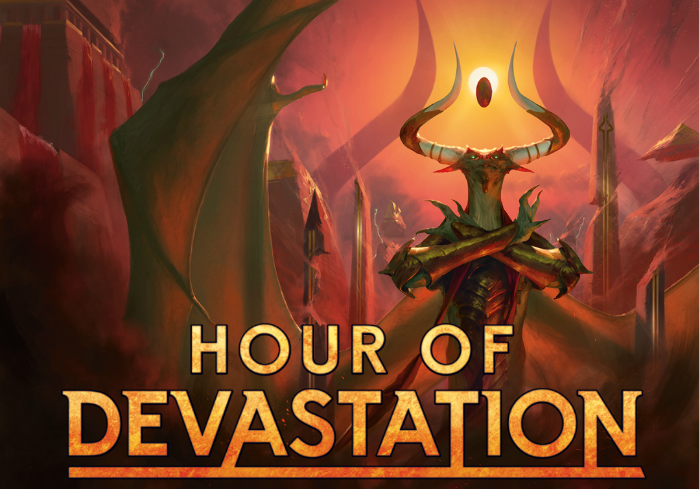 Stay tuned later this week as I drop my rare set review! It will be a YouTube video with a smaller written section on some of my ‘Cards to Watch’ as we branch out into this new and exciting meta game, stay tuned!