The hour of the God-Pharaoh is upon us, and with it comes some sweet new cards for us to play with!

As some of you may know I was unable to attend the Hour of Devastation Prerelease at my LGS Jack’s on Queen, as I was out of the country for some personal reasons. I did a quick search using the Wizards Event Locator and discovered a wee little place called Snake Eyes Gaming and Comics. It was situated behind a furniture warehouse in the office type section of the building. This little game shop had a decent selection of products, but the play area was awkwardly distributed between three small rooms, so when it came time to find your opponent you often spent five minutes ducking in and out of rooms calling random people’s names. Unfortunately the night did not get off to a great start as they started distributing products around 12:40. Regardless I got my prerelease pack and my promo card was Samut, the Tested. However my green was not good enough to warrant splashing so I built two seperate lists, a black/white zombie list and a red/blue spells list. I suffered from the Manuel curse and was awarded with a round one free win in the form of a bye. I won my second round but proceeded to bomb the last two. I’d give my prerelease experience at Snake Eyes Gaming a Comics a three out of five possible hours of devastation.

Return of the King

HA! Lord of the Rings reference! Upon my return to my beautiful country, I attended an afternoon prerelease at Jack’s on Queen. I brought my little cousin Carden, and he participated in his first prerelease! The little guy did really well, especially considering he has only played magic with myself in the comfort of his own home. Down below you can witness my sealed pool opening, and witness the underwhelming greatness.

So yes I did indeed end up tossing together a red/blue spells list utilizing The Locust God and Fraying Sanity to eek out a 2-1 record. My cousin is exactly like me when I started playing; is it green? is it big? will is smash people in the teeth? I LIKE IT! He got that in the form of a foil Rhonas’s Last Stand. I met up with him a few days after prerelease and he expressed much interest in tagging along for the Ixalan release….I’ve created a monster…

If you follow me on Facebook you may have noticed that the call went out a couple of weeks ago for a new logo/mascot for the website. I have been without one since the beginning and was looking for a wee face to put on the site. Well graphic designer Casey Binns tossed me a message and we hashed out the details, then she sent me this. 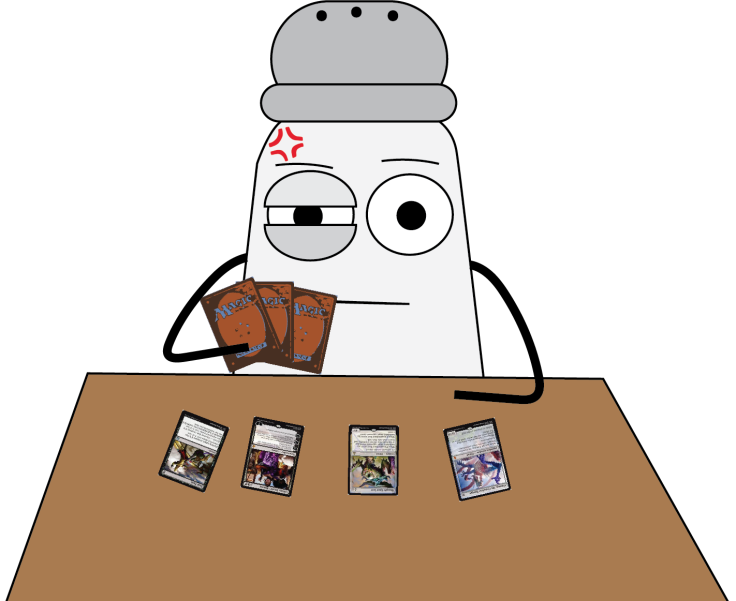 I think this little dude encapsulates what it means to be an anthropomorphized salt shaker. It’s the perfect embodiment of what it means to be salty; when your opponent gets that clutch top deck, or they have every single answer, or when you’re playing sealed and you manage to ramp into Sandwurm Convergence two turns early, only to have it swiped by Kefnet’s Last Word… I’m going to set this guy up somewhere on the page, thanks again to Casey Binns!

2 thoughts on “Hour of Devastation Prerelease”