What’s happening saltines? It has been a few weeks since my last FNM as work has gotten in the way. I once again traveled to Jack’s on Queen in Elmvale, Ontario to participate in their standard event.

After the supremely powerful showing of Ramunap Red decks at Pro Tour I decided to take standard’s “best deck” out for a different kind of test drive. If you know my magic history, then you’d be aware that I am a sucker for green cards. My very first deck was a green/black deck, and my very first FNM win was with a green/red aggro list back in Gatecrash days, but I digress. I ran a list I like to call Ramunap Green, it has the perks of the original, Chandra, Khenra, and Glorybringer, but with the added benefit of really efficient creatures like Tireless Tracker, and Ramunap Hydra.

Round 1; Win in 2 vs Grixis Control

Game one my opponent actually did some work with Kefnet of all gods. He actually had seven cards in hand a majority of the time and was able to deal ten damage to my face and five to my Chandra before I was able to get the win with a lone Tireless Tracker, whom had tracked so much that he had six +1/+1 counters. Game two I was able to draw more than one threat and I had assembled quite the squad of Glorybringers. Rode both of those glorious dragons to victory!

It’s always great playing against home brews. I love it when someone thinks outside the box, looks at two cards and goes ‘I’m going to break that’. This can be said for one gentleman at my LGS who put together Noose Constrictor and Archfiend of Ifnir. You just discard cards from your hand to pump the snake all the while withering your opponent’s creatures with the demon’s ability. This psuedo-board wipe can be quite punishing, but alas it was never meant to be for my opponent. Game one I managed to squeak out after a huge back and forth, but game two was quite different. I kept a super greedy one land hand and a mitt full of burn spells. I went seven turns before drawing a third land, however I managed to burn off every single creature my opponent managed to stick to the board. After I extinguished my burn spell inventory I had a sufficient amount of lands to start sticking creature threats and getting in some beats.

Approach of the Second Sun is quite the meme worthy card. It hasn’t seen much competitive high level play as frankly, the card is janky at best. But what better place for a janky card to thrive then at FNM! My opponent was on a blue-white counter/control build, with Approach being the solid finisher. Game one I got stuck on two lands and did literally nothing for a majority of the game. My opponent dropped a Gideon of the Trials and made an emblem. My later turns I managed to hit a third land, and when my opponent animated Gideon to swing I threw a Struggle at Gideon just so I didn’t have to discard come the end of my turn. I was fully aware that Gideon’s text reads “prevent all damage that would be dealt to him this turn”, apparently my opponent did not, as Struggle was met with a Negate. I was a wee bit confused but thought nothing of it. Next turn my opponent animated Gideon again and swung, once again I threw another struggle at it, and it was countered again. It happened once more, and was met with a Disallow. I was a wee bit excited that my opponent was using counterspells on nothing, but I was still stuck on three lands by the time he cast Approach for the second time. Game two I had a little bit of a better start with cards like Ramunap Hydra, Glorybringer, and Chandra, but my opponent had all four copies of Cast Out. You read that right, all four copies of Cast Out. You think that’s lucky? Get this. My opponent cast one Approach and put it seven down, they then drew some cards. When I surmised that Approach was the top card of the deck, I cast Survive, forcing both of us to shuffle our grave’s into our decks. Now normally all I do at FNM when a deck is presented is cut it, not tonight fellas! I shuffled my opponent’s deck like no tomorrow. AND GUESS WHAT HE HAPPENED TO PEEL OFF THE TOP OF HIS DECK….YEA….APPROACH OF THE SECOND SUN PART TWO…YOUR BOY WAS A LITTLE BIT SALTY…

Round 4; Loss in 3 vs B/G Constrictor 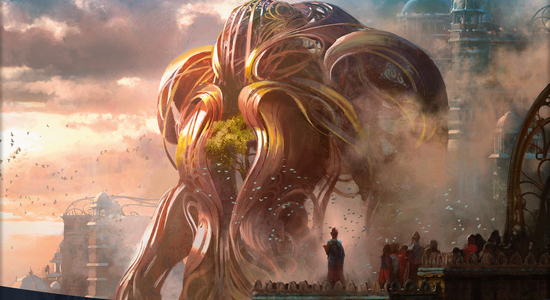 Game one and two were both very back and forth. I managed to sneak out game one, and my opponent went untouched in game two. It was game three in which I realized the deck needed work. Looking back at the health pad, I dealt about seven damage to myself with Ramunap Ruins and Hashep Oasis. I also had quite a few burn spells in my hand, but was limited to a single mountain and then pain lands, which led to my imminent demise…

I did more damage to myself then my opponent’s did half of the time. I’m a big fan of Glorybringer and Chandra, however I do not know if splashing the green made the deck better. I will have to take it back to the drawing board and see what I can come up with.

So on Sunday, August 13th, 2017, the ten millionth sanctioned MTG event was held at OMG Games and Collectibles in Barrie, Ontario. I heard about the event at FNM and decided to make the trek to Barrie to participate. The venue was quite full with Wizards of the Coast employees playing Pack Wars with event attendees, people grabbing food from the BBQ outside, and people getting their standard lists ready for the showdown. All of the profits from the BBQ and the main event donations were for the Children’s Aid Society of Simcoe County, which I now believe is called Simcoe County Family Connexions. After all was said and done OMG Games and Collectibles raised $940.  That is a great contribution and OMG deserves a large amount of recognition for such an event.

If you’re still reading then I know why you’re here, you want to know how I did eh? Well let me tell you! I decided to abandon the Ramunap Green list I ran at FNM, and I decided to alter my old Sultai list to combat the Ramunao Red menace.

When my opponent sat down he informed me that he was playing the store owner’s deck and he had no clue what was going on with the current standard meta game. I did not pull any punches. My opponent’s deck was running Bloodlust Inciters and Ammit Eternals, but other than that I didn’t really see much. Anytime something hit the board I met it with either a Fatal Push or a Die Young and I took over the game fairly quickly.

I hadn’t actually played against a Monument deck before so this was definitely a learning experience. Game one my opponent got out a little too slow, allowing me to stick a Demon of Dark Schemes and wipe their board. He later cast Dusk, killing my Demon, then casting Dawn to bring his dudes back to his hand. Little did my opponent know, DoDS number two was looming in my hand and once he decided to flood the board again I unleashed the second demon and my opponent scooped. Game two I kept a zero land hand, but let me tell you why. I had already taken a mulligan, and I didn’t want to drop to five cards. I had two copies of Attune with Aether, one copy of Fatal Push, one Traverse, one Die Young, and one Champion of Wits. I was on the draw, but didn’t hit a land until my second turn. I got out a wee bit slow and was just run over by fliers. Game three my opponent and I both slow rolled super hard. I had a single copy of the new inclusion in the deck Glint-Sleeve Siphoner, and I lost nine life to it, but I drew nine additional cards. It was a super close game but I unfortunately did not get there.

The dreaded Ramunap Red list, oh was I ready for you. Game one I got mega zerg rushed by wheenies but I was able to hold them off long enough to muster a board state of Demon of Dark Schemes, a lone zombie token, and two copies of Winding Constrictor. The only issue? I was at two life, my opponent was at eighteen and he was going to untap with a copy of Ramunap Ruins. He had one blocker in the form of Earthshaker Khenra so I was pretty sure I was doomed. I draw for turn, and it was a copy of Verdurous Gearhulk…GUESS WHAT BOYS? THAT’S LETHAL! WINDMILL SLAM THE GEARHULK, END UP PUTTING A +1/+1 COUNTER ON DoDS, THE ZAMBIE, AND THE TWO SNEKS. THE SNEKS ALLOW ME TO PUT TWO ADDITIONAL COUNTERS ON EACH DUDE. THIS MEANS I NOW HAVE A 8/8 FLYING DEMON, A 5/5 ZOMBIE, AND TWO 5/6 SNEKS. I SWING WITH THE TEAM, HE BLOCKS A SNAKE, AND TAKES EXACTLY EIGHTEEN POINTS OF DAMAGE. Needless to say it, we got there boys. Game two I just got rushed down. Game three my opponent quickly conceded once I managed to kill his Glorybringer and I tried to reanimate it with DoDS. As an aside, Life Goes On is an amazing clutch sideboard card.

I was super impressed with the quality of lists that showed up to the event. This was your typical Temur Energy list; Harnessed Lightning, Whirler Virtuoso, and Bristling Hydra. Game one ended quite abruptly when I used Champion of Wits’ enter the battlefield trigger to ditch Ulamog, the Ceaseless Hunger on turn three, and I reanimated him with Liliana, Death’s Majesty when I ramped into her on turn four. Game two was a little more back and forth, with my opponent amassing an army of thopter tokens thanks to Whirler Virtuoso’s ability. Unfortunately for my opponent, Demon of Dark Schemes makes short work of tokens with lower than three toughness. I used DoDS’s ability to bring a copy of Ulamog and Verdurous Gearhulk back from my graveyard and my opponent scooped it up.

We went 3-1 and managed to snag ninth place out of thirty three attendees which isn’t too bad. I definitely flubbed the U/W Monuments game two and I think if I had taken a mulligan it would have ended better for me, but hey, no guts no glory am I right? I am really impressed with the addition of Glint-Sleeve Siphoner to the list. The extra energy outlet is definitely welcomed and the extra card draw is amazing.

I was really impressed with OMG Games and Collectibles and their handling of the event. Congratulations and thank you to Richard and everyone at OMG for their outstanding contribution to Simcoe County Family Connexions.

Hey guys, if you guys enjoy my content and would like to support me put out high quality and higher salt content, please feel free to support me via my Patreon. Your patreon pledges help me go to more big scale events and put out more YouTube content.

Until next time, stay salty my friends!!!