How’s it going saltines? I hope all is well with you wicked spell slingers, and thank you for coming back for another round! Work is still consuming my Friday nights so I have been relegated to Tuesday night Standard Showdowns. I don’t care how I get my cardboard crack fix, as long as I get it am I right? But I digress, on to the show!

This past Tuesday I made my way through the dreary weather to Jack’s on Queen to kick some butt and take some names. I decided since it went so well last week, I would play my Ramunap Thicc list.

Now this was a list I was not expecting. I saw the turn one Attune with Aether and I assumed it was a temur energy list, but boy was I surprised when I got slammed with a turn three Enigma Drake. Unfortunately, amidst a flurry of Attunes, my opponent never found another threat so I took game one. I sideboarded in three copies of Scavenger Grounds, because shrinking down Enigma Drakes is a great way to swing the pendulum back in my favour. Game two my opponent saw a little more action with a couple of Soul-Scar Mages, and a Cryptic Serpent. But by the time my opponent had scraped together any semblance of a board state, there were susceptible to burn. 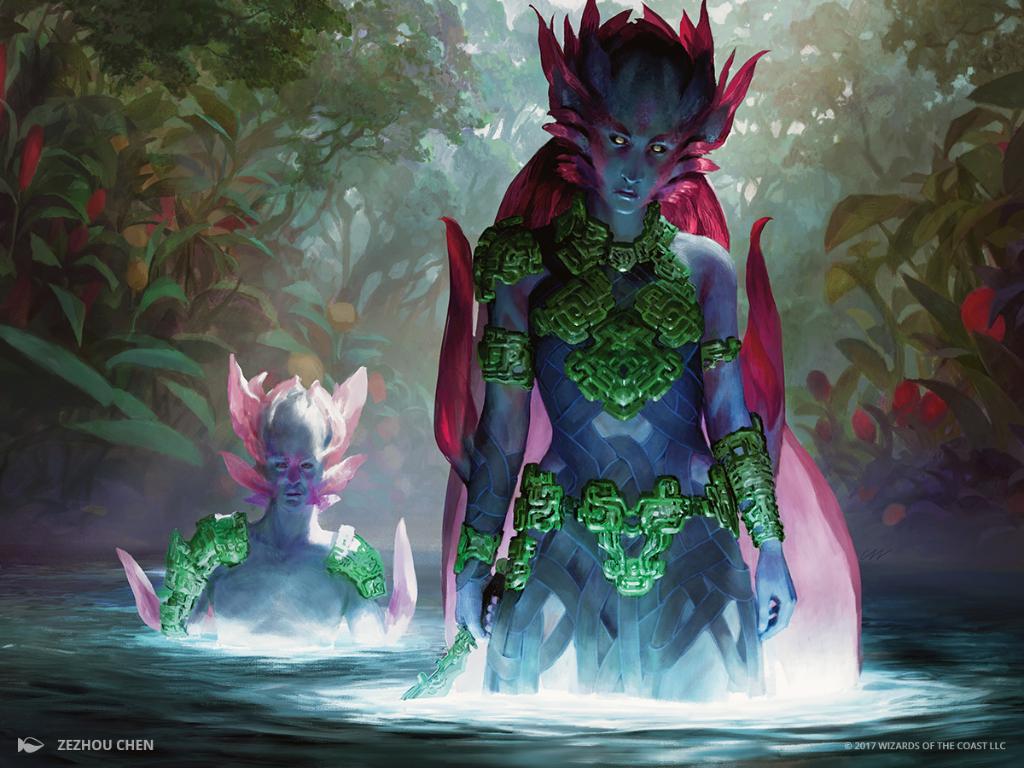 Revenge of the fish people from last week! It was the game gentleman from last week that we beat 2-0. Once he sat down across the table he said “Oh no…” oh yes!! Game one actually got super hairy for me when my opponent managed to stick not one, but two copies of Deeproot Waters. He began amassing a wee army of tiny fishmen that I could not burn away as they all had hexproof. Luckily my saving grace was the fact that he spent his turn three and his turn four casting those enchantments and that I was able to chip him low enough to be taken out by a couple of burn spells. You want to know the spiciest part about this first game? I was stuck on two lands for nearly seven turns, as when I finally decided to crack the Bomat Courier I had dropped on turn one, it had eight cards underneath it. I went into the sideboard and thought, if this dude likes making tokens, what better way to deal with that than three copies of Rampaging Ferocidon. I had to mulligan to six but I kept my hand, even though it lacked the clutch sideboarded dinosaur. My opponent must have gotten land starved or something because he didn’t really put up much of a fight game two.

Unfortunately the lack of people that show up to these smaller events is dismal, but hey that marks two weeks in a row in which we didn’t drop a single game. That being said, I issue a challenge to you, yes you reading right now. I want you to show up to Jack’s on Queen on Tuesday November 28th and take my down! Make it on your calendars people, I highly doubt any of you can achieve such a feat, but I welcome the competition.

Just a friendly reminder that the contest closes next week! I will be receiving entries up until 2359 on November 30th, 2017! You can comment on a post with a picture of your card, or send me a private message, just make sure I get it before December 1st!

And to clear up some confusion from last week, I will be the one signing the card. Not the artist.