How’s it going saltines? I hope all is well and I hope you’ve been enjoying the posts lately! Trying to pump up my rate of output, and your viewing helps to increase my reach so I thank you for that.

So this past Thursday I had some business to attend to in the north, and by that I mean Penetanguishene. While I was in the area I decided to swing by North of Exile Games and participate in their Thursday Standard Showdown. I swung in with Mettle Red, hoping to make the same impression I did at Jack’s last Friday.

This deck was spicy, and I was a fan. I was curious as to what I was facing when my opponent dropped a turn one Consulate Dreadnought. A one mana 7/11 is not the type of thing I enjoy playing against. Sram, Senior Edificer is what followed, and then a Peacewalker Colossus. I could see what my opponent was trying to do so I quickly dispatched of every threat I possible could with Abrade. Abrade is a back breaking card for my opponent, as seen in the second game when he threw a Siege Modification on a Consulate Dreadnought. Given it was a threatening 10/11 with first strike, Abrade turned it to dust. It was a really tough round for my opponent as four main deck Abrade and three sideboarded Harsh Mentors make for a hard time.

Round 2; Win in 2 vs Grixis Control 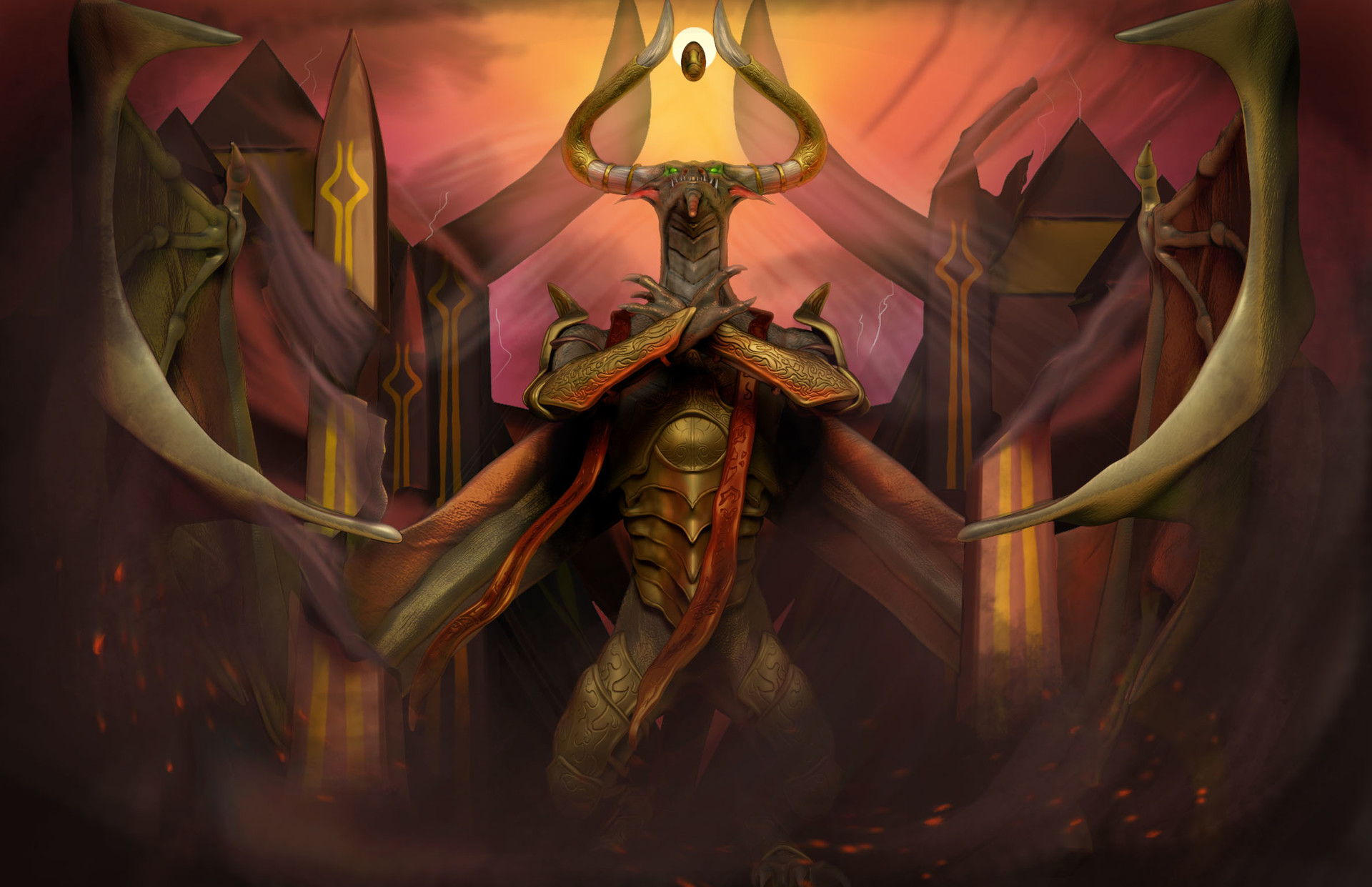 This was your typical Grixis Control list, using a myriad of counter spells, board wipes, and Nicol Bolas, God-Pharaoh to top off the curve. I was evidently too quick for my opponent both games, rushing him down before about turn eight. Rekindling Phoenix came in for game two and managed to eat two removal spells when I dropped him on turn four. It was a tough break for my opponent as I dropped a turn five and turn six Glorybringer. They did indeed bring me glory as I rode their backs to victory. 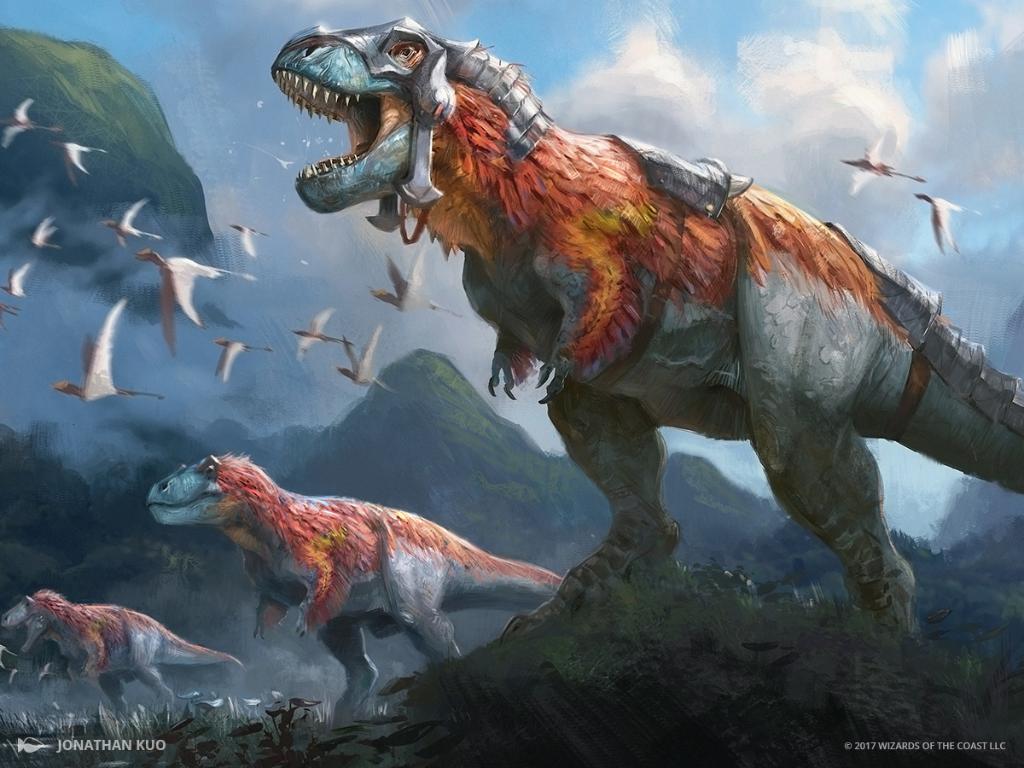 All aboard the dinosaur train! The first game was super close, I barely squeaked out the win before my opponent established quite a spectacular board state of daring dinosaurs. Game two was actually the fastest I think this deck has ever gone off. It started with a Soul-Scar Mage, and an Abrade on my second turn to take care of an Otepec Huntmaster. My opponent didn’t have a turn three play, but I sure did; enter Ahn-Crop Crasher, taking my opponent for 14 life. My turn four I played a Rekindling Phoenix and took my opponent to 10 life. My opponent’s turn five he played a Regisaur Alpha and shipped the turn to me. I slammed a Glorybringer and proceeded to combat, exerting both the Ahn-Crop to disable the token as a blocker, and Glorybringer to burn out the Alpha, effectively netting a turn five kill.

So I managed to 3-0 this event as well, and I think this deck is really good. I received a Standard Showdown prize pack as well, and inside was a Rekindling Pheonix which currently has a $27 value which is pretty sweet. I’m toying with the idea of putting them mainboard, but I think the deck is faster with them in the side, bringing them in for control match ups.

So after Wizards decided to blow our minds by unbanning two super power four drops in the modern format, everyone was hyping Jace, the Mind Sculptor, I was plotting my new modern list. I’ve been looking into building a second modern list for a while and decided on the idea of going wide, and I decided that I wanted to build an elf list. I had originally toyed with the idea of going strictly red and green, but the power of Shaman of the Pack is just too good to pass up.

So this is what I decided to come up with. I decided to swap out the Chord of Calling that most elf decks run in favour of Atarka’s Command, because nothing feels worse then cascading into Chord via Bloodbraid Elf for zero. Elvish Archdruid is really a heavy hitter in this deck. Sure he seems like a typical lord, but the ability to add G for each elf is insanely powerful when combined the Ezuri’s ability to regenerate, as well as his overrun.

Now I know some of these are unorthodox, but hear me out. Banefire we bring in for prison decks. Sure I can’t swing, but how about I tap out for a bunch with my dorks and fireball your face? Bonus points if it reaches five and up.
Blood Moon I think is pretty standard tech, basically beats Tron, and shuts off greedy mana bases. With out supply of mana dorks, we basically always have access to green, so in the event we don’t hit any forests, we can survive.
Essence Warden is either for Soul Sisters match-ups or for the mirror. Getting ahead on life in a mirror is crucial, especially if we are on the draw.
Fracturing Gust; might as well say bye bye Lantern Control. What’s that Affinity? Your entire board state is artifacts? See yuh nerd!
Heroic Intervention comes in against U/W Control or any other deck running heavy sweepers.
Kolaghan’s Command comes in to replace Atarka’s Command in games of attrition. Against decks like Jund, Affinity, and other grindy creature based stratagems.

So there you have it, my Jund Elves list. Let me know what you think in the comments below, and hey, if you’ve got any of the cards and are looking to trade, hit me up! Because all I have is two copies of Collected Company…..