Hellooooooo saltines and saltettes! I hope everyone is doing well, and everyone is enjoying the hot mess that is Dominaria!

I apologize for the delay. I’ve got a lot of stuff on the go, and my aim is to bring you the best content possible!

This post is made possible by the wonderful sponsor to the blog Jack’s on Queen. Located about two hours north of Toronto, Ontario, Jack’s on Queen is nestled in the cute wee town of Elmvale. You want MTG singles? They got em. Comics? Yup. Miniatures? You bet. Swords? SURE WHY NOT?!

It’s Friday night! I made my way to Jack’s to participate in their standard FNM to prep myself for a PPTQ the following day. Truth be told, I don’t have many of the new Dominaria cards, so for the next little while we are going to be running back the same old G/B Snek, with the addition of the Doom Blade-esque Cast Down and Carnage Tyrant in the main board.

What was Wizards thinking? “Let’s make a five mana, 5/5, give it flying, first strike, lifelink, and a tribal anthem.” WotC has officially lost their marbles! But I digress. Game one I had to take a mulligan to six. With this smaller, sub-optimal hand of cards, I just go straight out tempo-ed. We traded creature for removal until I was running on empty, and he finally managed to land a game ending threat. Game two saw my opponent run into some land trouble as he got stuck on four. I however had the opposite issue and was drawing nothing but lands. The game ended with a Llanowar Elf dealing seven points of damage, one turn at a time. Game three was insane. My opponent stuck Lyra Dawnbringer on turn five but was unable to attack, as my crack back would have been lethal. My opponent and I played this game of draw, play a thing, pass, for about five turns until I decided to swing for the fences. I swung in with quite a few sizable threats and a lowly Llanowar Elf. Instead of blocking a significantly larger threat and risking losing Lyra, my opponent thought it best to block the elf, and use the lifelink to stabilize. What my opponent wasn’t counting on was me using Fatal Push to kill my own elf before damage, thus rendering my opponent’s block irrelevant, and I took the game.

Round 2; Draw vs U/W Cycle Control 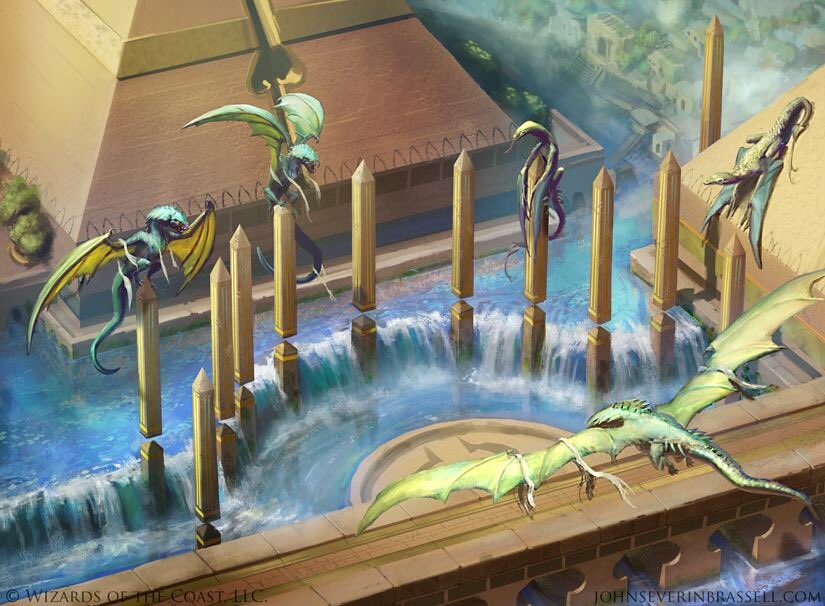 Talk about the grind of a century. Game one I got out to a blistering start, like one of those turn six kill blistering starts. According to my opponent his deck was only supplying him with late game spells, yet we never hit the ‘late game’ and unfortunately I just got out too quickly. Game two was quite the reverse ordeal. My opponent had answer, after answer, after answer. I’m currently looking at the life pad from that game, and my opponent was at 14 at one point, went to 20, then to 17, then to 22. A combination of Fumigate and Renewed Faith kept him stable as he continuously wiped my board away. Game three was once again a slug fest, but this time there was a new threat I had to deal with, Hollow One. I was shocked to see my opponent stick the artifact creature. My mind was blown, how had I not realized how good this is in the deck? Unfortunately I had brought in Naturalize to deal with thinks like Drake Haven, and Cast Out, so Hollow One was not long for this world. That being said, I never saw any copies of Naturalize. My opponent had a lone Hollow One and I was at three life. I had no cards in hand, and I needed to draw a removal spell of some type. I fist bumped my deck and drew the card, Vraska’s Contempt. We went to time this game and we finished the game with my opponent at 23 life, and myself at five. 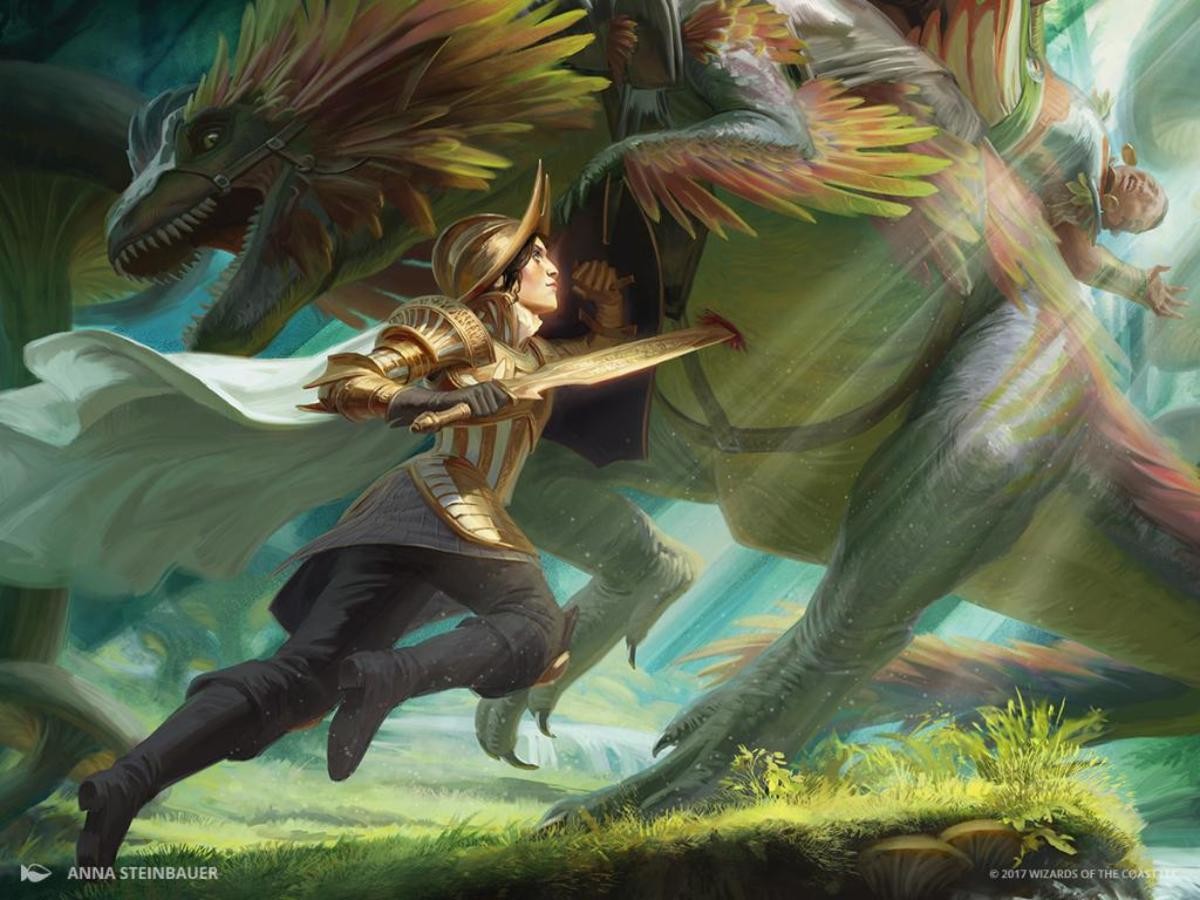 I’m not going to lie to you, I love this list. It is a blue and white aggro deck, that utilizes various auras to get the job done. What makes this possible is the resilience of Adanto Vanguard, just load the sucker up with enchantments like Curious Obsession, Cartouche of Knowledge, and Cartouche of Solidarity, and you’ve got one meaty dude. Oh? What’s that? Your opponent is playing a myriad of black based removal spells? Meet Dominaria’s new answer, Knight of Grace. This hooman knight did wonders against me in both of our games. My opponent was on the play and dropped him on turn two. At the end of his turn I tapped my Blooming Marsh for a black and hesitated as my opponent cracked a smile and said ‘no Fatal Push for you!’. He was indeed right, all of the removal in my deck was black, and this little dude proceeded to punch my teeth out both games. THAT’S RUDE MATT!

We went 1-1-1 at FNM. Our round three was a complete and utter blow out. I am still floored at how much I enjoyed playing against the U/W Auras deck even though I stood zero chance against it. Drake Haven was a total slag to get through, and we didn’t even manage to get through it all the way. The G/W value deck took the first game off of us, but overall was able to take the W.

Oh yeah, competitive REL baby. I live for competition, so anytime I get to attend an event that forces me to keep my play sharp, I’ll be there. That being said I traveled to Penetanguishene this past weekend and participated in North of Exile Game‘s PPTQ Atlanta. It was a standard format event, so G/B Snek was my deck of choice. 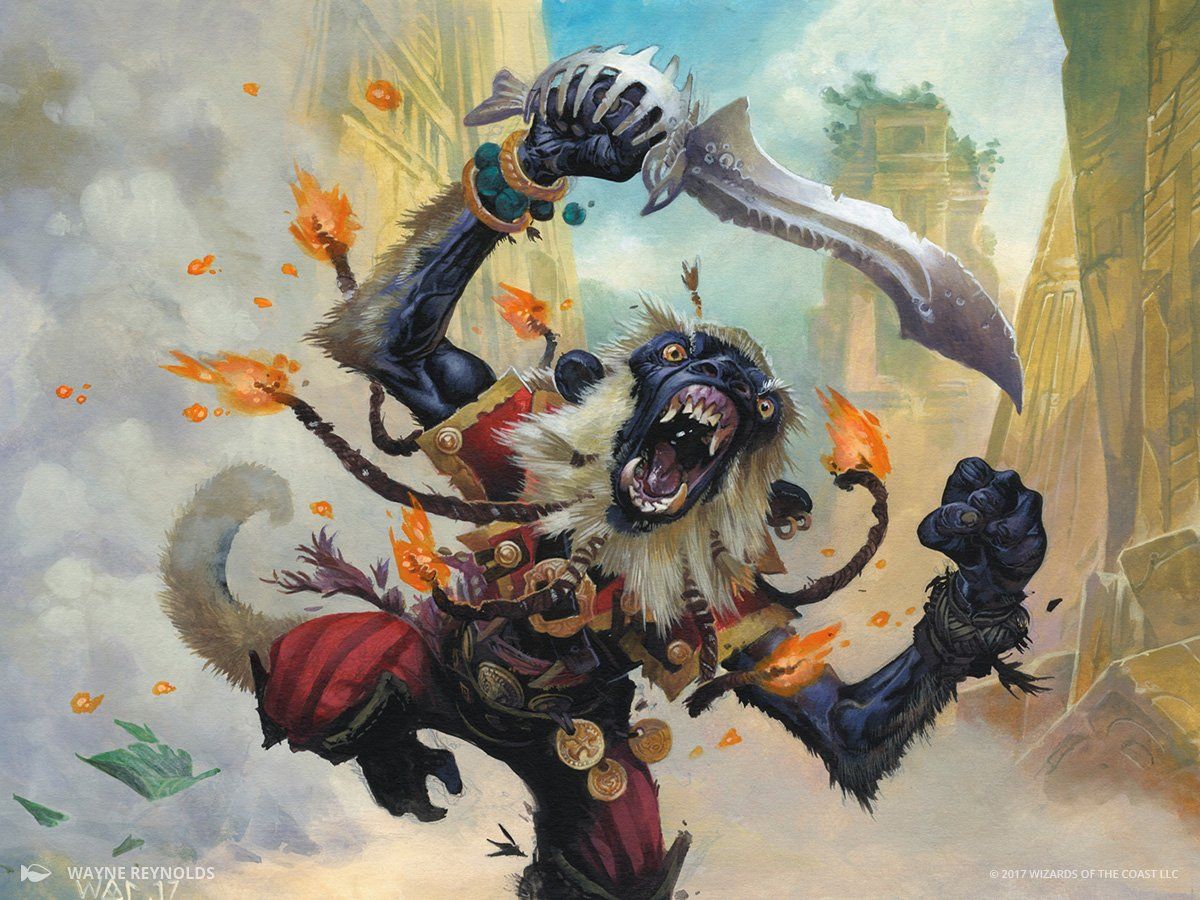 Round one was against one of Jack’s regulars, let’s call him the Flash. The Flash was piloting a red and blue aggro deck, sporting aggressive goblins like Fanatical Firebrand, and Skirk Prospector. Game one my opponent had to take a mulligan to six, so his limited hand made for a pretty easy game for myself. Game two I didn’t really know what to bring in so I dropped a lot of the high costing creatures and brought in all of the removal. Little did I know my opponent was rocking a GPG package in the sideboard, which luckily for me, never saw the light of day. Even if this went to game three, Thrashing Brontodon, and Vraska in our sideboard, coupled with three copies of Naturalize makes for a pretty oppressive game.

Oof. Once again Lyra rears her ugly head, and when I say ugly I mean gorgeous because she is an angel…duh. Apparently this w/b vehicles list has been cleaning up a lot of high profile events, and I can see why. The deck is powered by Gideon of the Trials, Heart of Kiran, and Karn, Scion of Urza. The deck also boasts powerful support cards like History of Benalia. These games were unfortunate for me, as I was experiencing some land difficulties. Game one was super close, as I was one turn off of a Walking Ballista kill. Game two I had three land when the game ended on turn nine. Even if I had had the appropriate land I am unsure that I would have been able to pull the game back. W/B Vehicles is a scary list, and it will continue to do well. 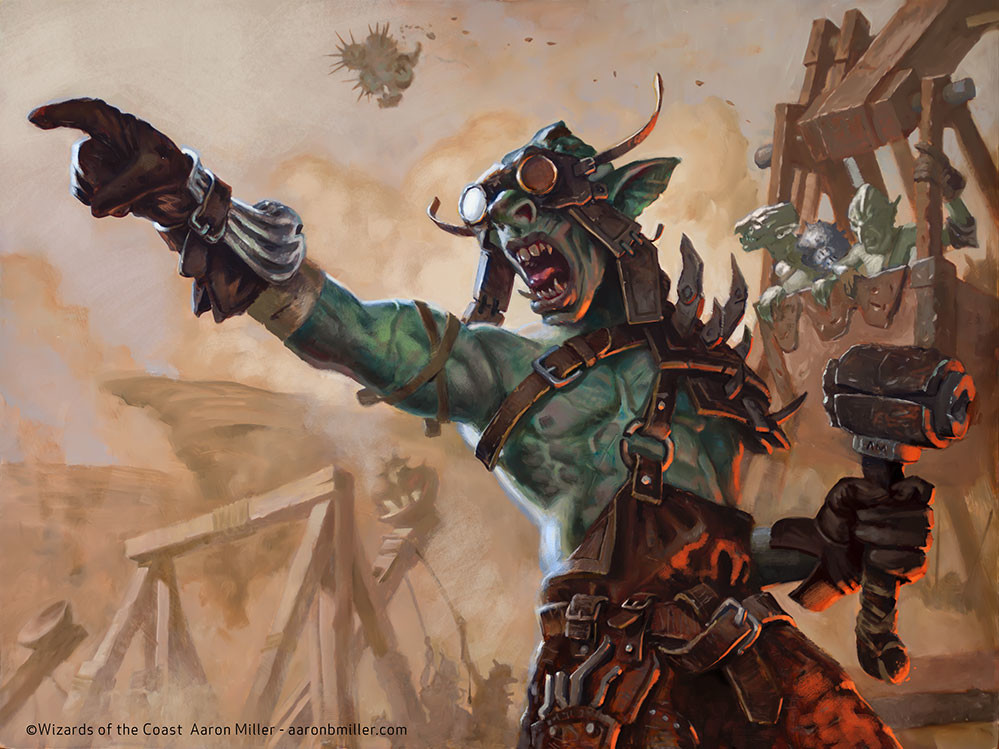 Holy aggressiveness batman. Ramunap Ruins is an issue? Have you seen this list? This is indeed a God-Pharaoh’s Gift deck powered by sacrifice outlets like Skirk Prospetor. Siege-Gang Commander in combination with GPG provides a solid 4/4 with three little friends. Both of these games I just got blown out, like turn three/four kill both games. I just got completed steam rolled, no chance of coming back from that. Yikes. 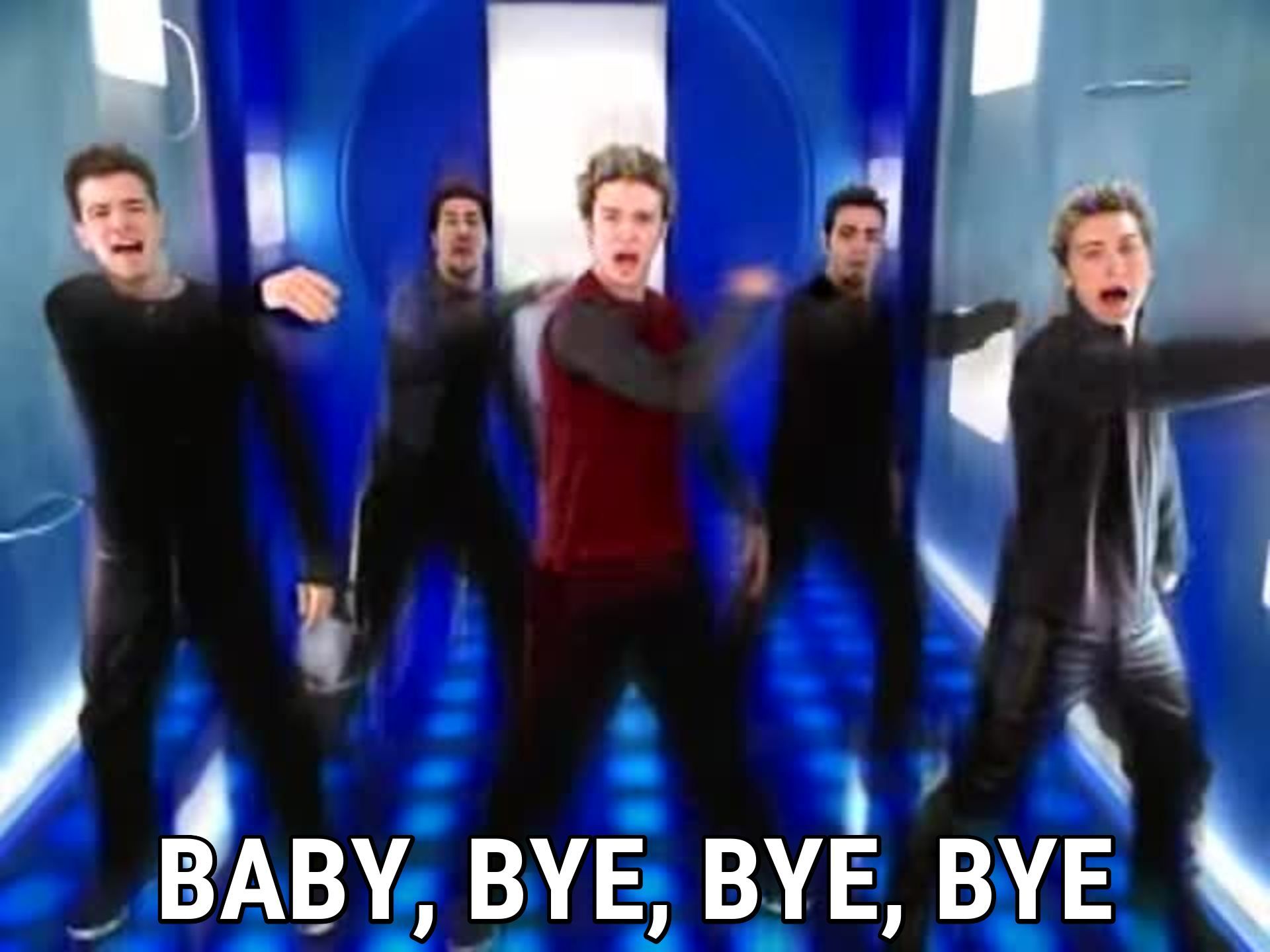 Move over modern burn decks, The Flame of Keld is setting fires in standard. Game one really showed off what my opponent’s deck could really do. My opponent had controlled my board well enough, and then finished me off with back to back to back Wizard’s Lightning, just in case you weren’t keeping track, that is fifteen points of damage, WOWZERS. That being said, games two and three my opponent had a really rough time. Both games my opponent drew an absorbent amount of lands and I had enough time to punch his life total in the face.

Winning the last round put me at 3-2, and I managed to scrape into the top four in fourth place!

Semi-Finals; Loss in 2 vs Goblin Gift

This was the same opponent I lost to in round three. Game one was a total grinder. My opponent was sitting on a lone Hazoret, staring down a large board state on my side of the battlefield. By the time I had stabilized I was sitting on a measly eight health. After about three turns of swinging through Hazoret I had my opponent at four. My opponent had one card in hand, and I was at four as well. I played a Jadelight Ranger, hoping to hit a Hashep Oasis, but what I revealed was a Walking Ballista, which if I had drawn that, would have been lethal. My opponent pitched that last card, and the one he drew for turn to push game two. Game two was very similar to our first encounter in round three, toal stomp.

Welp, we cracked fourth place! I think it’s time to retire the good old Snek deck. I am in the process of prepping for nationals, and I’ve been play testing G/R Monsters online and I feel like it is in a really good place for the standard competitive meta. Stay tuned for a possible deck tech!